NEWS FROM THE HUMAN-SCALE CITY: FIRST ROUND-UP FOR 2017!

The steering committee for New Yorkers for a Human-scale City has a few announcements:

Two articles in industry journal The Real Deal  had bone-chilling headlines, “Who’s Pulling the Strings: and  “An Industry Eager to Embrace Trump.”  It is dated December 2016.  The latter article contains a scattershot roundup of opinion from New York’s Lords of Real Estate, most of whom describe the coming Trump era in glowing terms.

We learn that Trump supporters in the Big Real Estate World are “Lorber, Steven Roth, Richard Lefrak, and John Paulson,” not to mention billionaire real estate investor Jeff Greene and Joseph Cayre of Midtown Equities.  The latter is quoted thus:

“We’re very very high on what’s happening with New York real estate now.  I think he’ll get rid of all those bureaucracies that hold back business and all those  laws that were put in in the last administration.”

Big-time broker Louise Sunshine also gives this quote, “I believe in Donald.  I believe in everything that he can do.”

Worse, we learn in the same issue of Real Deal that Trump has named developers to his so-called “economic advisory committee (being an economist, it is hard not to roll my eyes here):  Richard LeFrak, Steven Roth (Vornado Real Estate), and Howard Lorber (Chairman of Douglass Elliman Real Estate, among other titles) –  not to mention his son-in-law and fellow developer, Jared Kushner.

Well people, it is hard to contemplate all this without either laughing or weeping.  But we knew already that the lunatics have taken over the asylum.

What Drives De Blasio to Turn Midtown into Dubai?

As the De Blasio administration prepares to rezone and hyper-densify Midtown East with a highly questionable air rights program and a fusillade of supertall buildings –  the quantity of which will change New York into Dubai, we ask:  why should we buy into the notion that the existing office stock is useless or can’t be renovated to suit without a rezoning?  The whole premise of the rezoning proposal seems suspect.  And hey, we know several midtown worker bees who say their offices are underused, even though beautifully renovated.  That makes us doubly suspicious.  So what gives?  Is the public good at stake here or real estate developer profits?

Buried in the Wall Street Journal is a hint:  turns out that rents for the top (meaning supertall) segment of the midtown office market is driven by the demand of hedge funds and other financial firms.  They want to rent what real estate insiders call “trophy” office space.  That means huge open spaces with mile-high views.   Here, from the real estate ads, are a couple of views the hedge funders are willing to tear Midtown apart for.

Shame on our city politicians for allowing developers to twist our city into Dubai just so developers can get their “trophy market” profits!  And shame on them for trying to bamboozle us with stories about how the existing buildings are too old and ugly to be useful to the hedgefunders.

Making it all the more destructive an idea, it turns out that demand from hedge funders for Midtown office space is slowing down!  Real estate developers are offering all kinds of free rent and free office build-outs to get the hedge funders to rent.  All this was buried in a WSJ  sub-headline called “Hedge Fund Demand Pushes Office Rentals“. Will the slowdown dampen their enthusiasm for turning Midtown into Dubai?  Unlikely, but it should gives the pols pause.

Activism for New Yorkers in the Age of King Trump:

An Op-Ed and an Invitation to Debate

In the nightmare that is upon us at in the White House, New Yorkers have heeded the call from the authors of “Indivisible: A Practical Guide for Resisting the Trump Agenda” (link here).  They have also listened to the speakers at the Women’s March.  The upshot?  Thousands of furious voters are trying to copy the Tea Party tactics all over New York City.  Inboxes are flooded with calls to protest, sign petitions, rally against evil appointments, and write letters about the abuses of executive orders, and in general to lay ourselves down in the barricades against King Trump.

Our Mayor and some local electeds have been quick to take advantage of all this, addressing rallies as if our Mayor is the leading “progressive” in the nation and not a politician that is not himself deeply allied to Trump’s real estate industry.   So are the people at Indivisible sending out the right message to irate New Yorkers?  Maybe not.

The Good Part About “Indivisible” and the “New” Activism

The Tricky Part of applying Indivisible here in NYC

One Weird Thing about “Indivisible” and some Unanswered Questions

“The Trump Agenda” here in NYC is also a Real Estate Agenda:  We Should Fight It

Not one, but TWO grand juries looking into De Blasio? 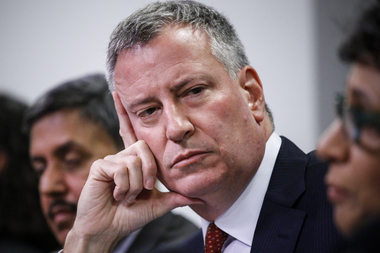 The New York Observer has been speculating on scenarios that would lead Clinton to declare herself for Mayor.  They write:  “Scenario 1: de Blasio is indicted. It’s unclear if this will happen, but once you’re being interviewed by prosecutors multiple times, it’s clearly a possibility.”

Yikes!  Our heads are spinning.  Could the real estate industry (via Trump’s son-in-law who is a real estate developer and publisher of the Observer) be throwing De Blasio under the bus?    Click here to read the full article.

The New York Times also had several articles about the two grand jury investigations into De Blasio.  The more recent can be found here.   The Times also covered the measly $48,000 fine De Blasio had to pay for campaign finance violations.  Read that here.

We also note in the same vein this related story:  Charles Hocking, president of Hazen and Sawyer and a supporter of de Blasio, is now ALSO under federal investigation. Hocking raised over $53,000 for de Blasio’s campaign with a majority of that money coming from his own employees. His company has received over $126 million in city contracts under de Blasio — that doesn’t sound suspicious, does it?  The Mayor’s claims that “no donor got favorable treatment.” Hocking is only the most recent in a number of higher-ups who gave de Blasio money and are now under scrutiny.

Click here to read the DNA Info article and here for the Daily News article.

Millennials (and Everyone Else?) Moving from Cities to Suburbs

The past two Mayors have justified their “hyper-density” policies by claiming that a flood of new people are coming to the city over the next 25 years and that we have to build like crazy and as high as possible to house them.  Anyone who opposes that idea is seen as unpatriotic NIMBY.

But wait – how accurate is the part about all the newcomers over the next 25 years?

According to a demography professor at the University of Southern California, American cities have reached “peak millennial” in 2015 in terms of the number of millennial kids who moved to a city.  Recall that there is an on-going debate:  will young people raise families in urban centers or opt for the conventional suburbia?   Those estimates will impact city budgets, determine how many swanky new apartment buildings will be built, and complicate gentrification.

Turns out that suburbia is actually growing more than cities; suburbs accounted for 91% of population growth in the last 15 years. Contrary to what writers like Edward Glaeser or Vishan Chakrabarti say, not everyone wants to live here. Employment in cities has grown by only 6% while employment in suburbs has grown by 9% in recent years.  Many demographers argue that it is not cheap housing that makes people pick up and move to a new place, but JOBS.

You can read all about it in the New York Times article here and the Wall Street Journal article here.

It was a tie for us.  You choose which is worse. 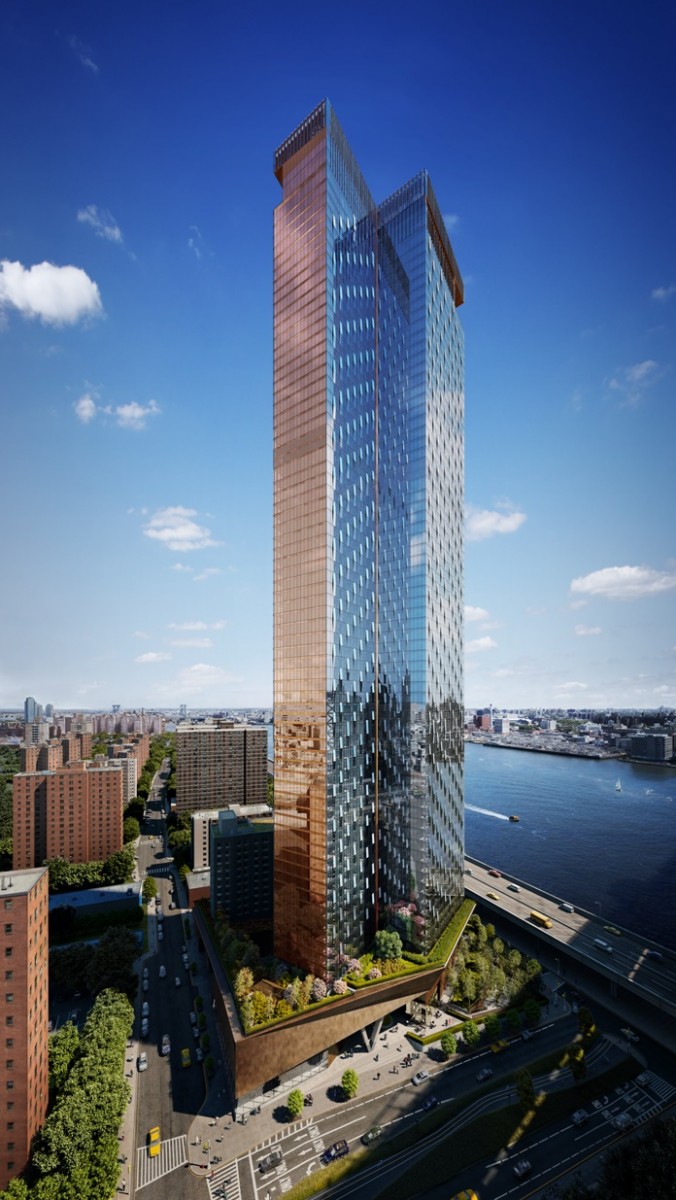 Feast your eyes on One Manhattan Square (above), a new monstrosity on the Lower East Side by Extell. This glass tower is 800 ft tall and the ads for it boast a pet spa, dry cleaning valet, and a cigar room. Why have a city at your doorstep when you have everything you need inside your building and the FDR right there to make your escape to the country.  Ready to move in? Prices start at a reasonable $1.15 million. Yeah, you can definitely afford that.  Seriously people, shouldn’t they be paying damages to the surrounding residents who have to look at this eyesore the rest of their lives. Locals call it “the tower from hell.”

It was hard to pick a despicable tower of the week with 565 Broome St. as a contender. Hilariously, Bizzi & Partners Development claim that these condos “bring an elegant 21st century tone to the neighborhood” and “will soar above its surroundings, while fitting into the fabric of SoHo seamlessly”. Maybe I should look up the definition of ‘seamlessly’.

Best Signs from the Washington Women’s March: A Selection

Quote and Understatement of the Week

“Crony capitalism, the practice of business elites abusing access to political power for their own financial gain, isn’t new to Washington.” [or New York, either, no?]

Coming up Next Week